Photo (l-r): SCVTHS students Matt Wright of Branchburg and Ernesto Monge of Hillsborough, who were named the fourth-year and overall winners in the SCVTHS Third Annual Amuse-Bouche Contest.

For the contest, the Culinary Arts students were divided into their cohorts and worked in small teams to compete against each other.  The students then used their creativity and culinary skills to create amazing amuse-bouche dishes.  SCVTHS staff members were used as judges in order to determine a winner for each the second, third and fourth-year students, as well as an overall winner of the contest.

This year, seniors Matt Wright of Branchburg and Ernesto Monge of Hillsborough were named the fourth-year and overall winners of the contest.  Matt and Ernesto’s winning amuse-bouche dish was a grilled shrimp and caramelized mango skewer. Toni Romani of Neshanic Station and Charlie Shiloff of Somerville were named the third-year winners and the team of James Cote of Branchburg, Val Maldonado of Somerville, and Melany Borodkin of Bridgewater were named winners of the second-year Culinary Arts students.

Instructor Johnson went on to add, “This year our A-shop was well represented, capturing not only each grade level title, but the overall title as well!  Matt & Ernesto, who presented Shrimp with Caramelized Mango Skewer, were named the overall winners by our three SCVTHS staff member judges: Susan Kiser, Randee Holz & Brandon Kornbluh.  Congratulations to all our Culinary Teams!”

(below - left to right)
SCVTHS students Charlie Shiloff of Somerville and Toni Romani of Neshanic Station, who were the third-year winners in the SCVTHS Third Annual Amuse-Bouche Contest. 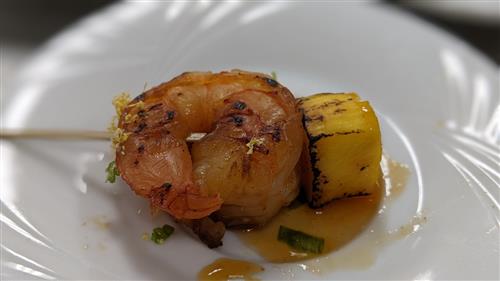 (l-r): SCVTHS students James Cote of Branchburg, Val Maldonado of Somerville, and Melany Borodkin of Bridgewater, who were the second-year winners in the SCVTHS Third Annual Amuse-Bouche Contest.