On December 15th and 16th, students and staff at Somerset County Vocational & Technical High School (SCVTHS) welcomed a group of ten US military veterans and four Gold Star Families to their sixth “An Attitude of Gratitude” event. The event took place over two days in order to comply with safety measures.

“The reason our school held the event was to maintain the bond between our Gold Star Families, veterans, and students,” stated Social Studies Instructor & Army Veteran Ed M. Graf.  “They have a bond and love to help each other. We haven't been able to get together for the last two years, so this day's event was even more special.”

Mr. Graf went on to add, “The talks with the veterans are actually opportunities to speak with a primary historical source.  For example, we learned about the famous meeting between General MacArthur and Emperor Hirohito at the end of WWII.  One of the veterans who has attended our school event was actually there guarding the meeting and was able to speak to the students about it.”

In addition to the event, students from the SCVTHS Culinary Arts Program created and served a meal for the attendees in the school’s Trade Wins Restaurant. Veterans in attendance were from various VFW and American Legion Posts throughout Somerset County. Additionally, the veterans served in different branches of the military and in different wars.

Mr. Graf and his students are now hard at work preparing for the Proud to be an American Day event, which is scheduled to be held in May. 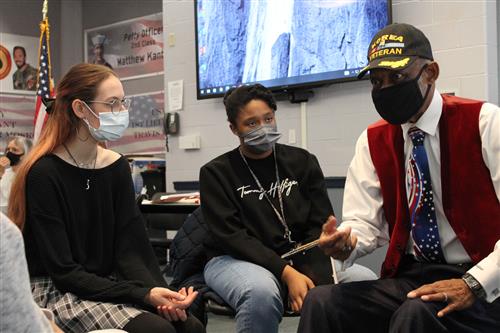