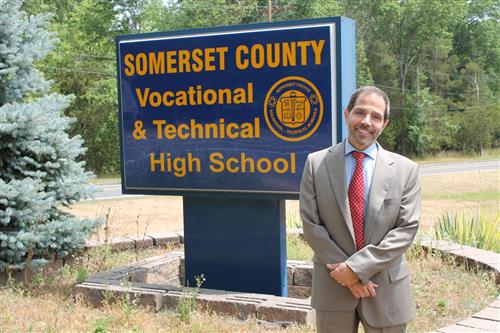 On August 1st, Somerset County Vocational & Technical Schools (SCVTS) welcomed Mr. Robert Presuto as the new Superintendent of Schools. Mr. Presuto, who was most recently the superintendent at Boonton Public Schools, brings 28 years of educational experience, with nearly ten of those years serving as a superintendent.

Coming from a comprehensive high school, Mr. Presuto explained, “There are a myriad of aspects which attracted me to a vocational district in general. As an Alternate Route teacher of computer technology, I am connected to vocational and technical programs, as well as the staff and students who are very interested in teaching and learning them.” Presuto went on to add, “What excites me about SCVTS, in particular, are the boundless opportunities I see in this institution. These include the growth of the facilities and the student population, adding several new CTE programs, and for me personally, being involved in yet another large-scale construction project which is making these tremendous opportunities possible. This will be my fourth large-scale school expansion project in the past 20 years.”

“My first goal is to get to know everyone and subsequently, have everyone get to know me,” said Presuto. “In the process, I want to listen and understand what folks feel is both outstanding about SCVTS and the areas they believe can be improved. Respecting and continuing the positives is paramount; realizing and understanding where and how we can improve is what makes an organization truly exceptional. That’s ultimately what I would like to accomplish– leading and contributing to an exceptional place to teach and learn.”

Mr. Presuto also brings to SCVTS his educational experiences from around the world. “I've had the opportunity to visit and be invited into school systems in several countries to learn more about them,” stated Presuto. “To date, I've been to schools in Japan, China, and England. Stateside, I've visited many school systems, the most memorable of which was in Hawaii. It was a native Hawaiian school on the island of Molokai which was just incredible!”

“Ralph Waldo Emerson is credited with the two main pillars of my educational philosophy,” explained Presuto. First, “‘The secret of education lies in respecting the pupil.’ If teachers let their students know that they both respect and care about them, they have surmounted perhaps the greatest hindrance to becoming a transformative educator.”

Secondly, “‘Knowledge exists to be imparted.’ There is so much to learn in the world, and so many sources we can learn from. As teachers, our mission is to impart whatever skills and/or knowledge we have to our students in the hopes that they will one day surpass that which we've taught them.”

Discussing the importance of vocational education, Presuto stated, “I am a big believer in students becoming multi-faceted learners, and multi-skilled members of society. Vocational programs are valuable in terms of career readiness, learning to work with one's hands, and developing problem-solving skills. CTE programs also provide an outlet for creativity and foster ingenuity. The cost of a two or four-year college program has become astronomically expensive for many, if not most families. If you can learn a trade or highly marketable skill right out of high school, for some young people this is a way to get a head start on the post-high school journey of joining the workforce and saving for one's dreams and aspirations.”

Presuto, a resident of Nutley, enjoys traveling, genealogy, tinkering in his garage, and day-trekking on his gravel bike. As a way to share his passion for cycling, Mr. Presuto has been a volunteer mountain bike coach for the past six years with the National Interscholastic Cycling Association. “I had never officially coached a sport, and my experience with student-athletes has been awesome and rewarding beyond my expectations,” said Presuto. Additionally, Presuto volunteers at the South Orange Performing Arts Center. Presuto remarked, “It allows me to support an organization I care about and experience some incredible performances as well.”